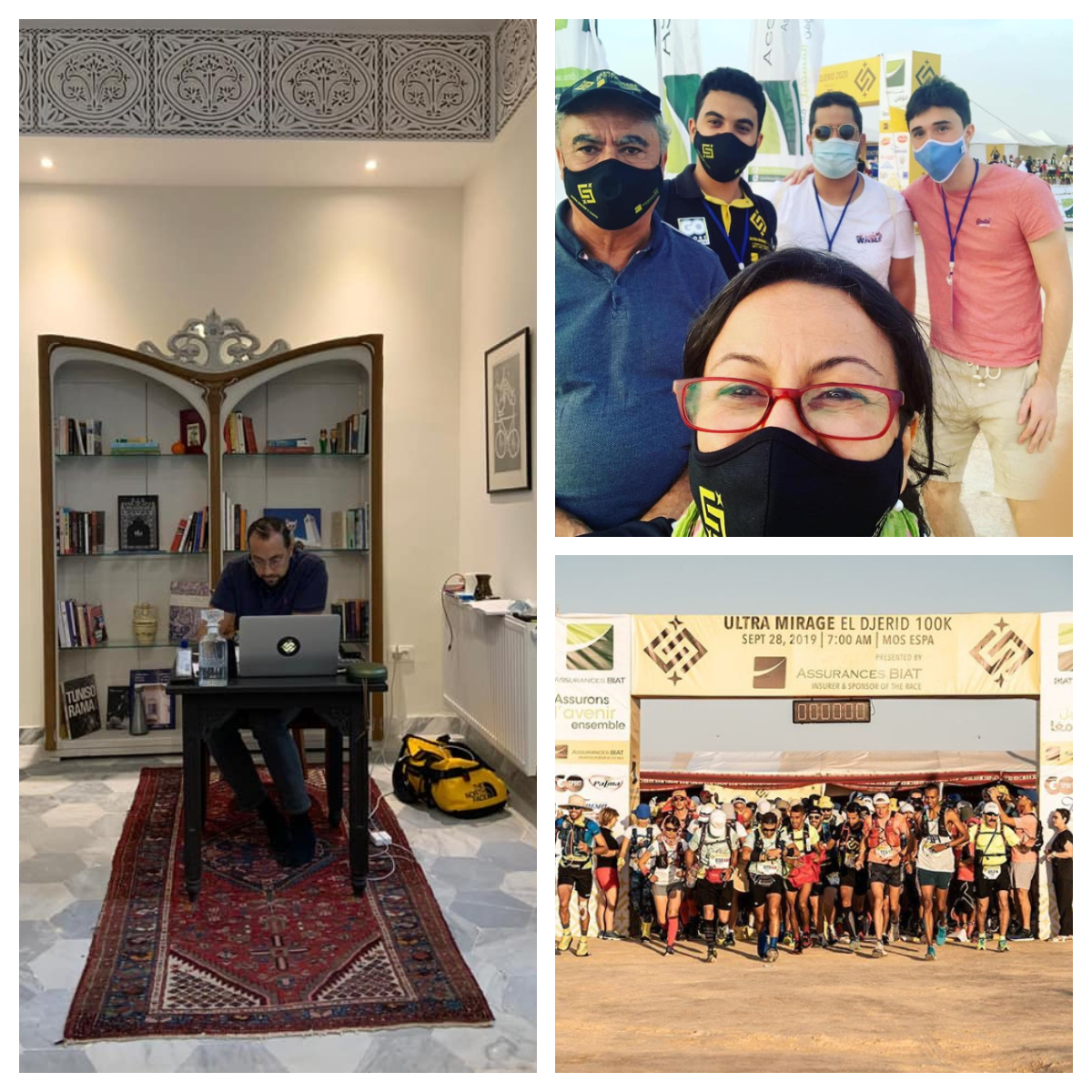 Posted at 13:05h in Non classifié(e) by darbengacem
92 Likes
Share

At noon on Thursday October 1st, I took my seat and prepared myself for the seven-hour bus ride to Touzeur, a city in the south-west of Tunisia. Dar Ben Gacem is one of the many supporters of Ultra Mirage El Djerid, an annual 100-kilometre ultramarathon through the Tunisian Sahara. Our little DBG team volunteered for the full three days, helping out in whatever way we could – we were warned in advance that Touzeur would not be a holiday.

But what is Ultra Mirage? Founded by Amir Ben Gacem (brother of Leila Ben Gacem of DBG fame), Ultra Mirage El Djerid is a brutal ultramarathon through the Sahara Desert. The race is typically 100k and this year Amir introduced the new 50k course for those who are less masochistic. The course takes runners through awe-inspiring desert landscapes at all times of day: the cool of dawn, the brutality of noon, the relief of twilight and the starriness of night. The youngest ever runner in 2018 was then 15-year-old Khalil Ben Gacem (I know, another Ben Gacem) who placed an incredible 41st out of 176 runners. Khalil is a good friend of mine so I would never tell him how impressed I am… but it is truly astonishing!

Amir stayed for a week in Dar Ben Gacem before the preparation began, and I was able to ask him a few things about his race. He described the difficulty of managing such an event during the coronavirus pandemic, especially when the governor of Touzeur had been reluctant to allow it to proceed. Moreover, UMED was the only ultra-race in the world in 2020, which put a lot of pressure on Amir not to make any mistakes. I asked him why, given all this pressure, he didn’t just cancel the race: he replied that, as an ultra-runner himself, he knew how much training goes into preparing for a race like this, and how disappointed the runners would be if it were all for nothing. Amir also feels obliged to the local community whose economy is strengthened by the annual influx of hundreds of people. Indeed, this year the products used in the race were 100% Tunisian. Around 500 runners had registered for the race this year, but only 221 (of 17 nationalities) could attend due to international travel restrictions and such – still, impressive numbers for a race that began in 2017.

Anyway, back to the three days in Touzeur: on the second day I worked with Dali, one of the DBG guys with whom I was sharing a room, who had to look after runners and their entourage. We were tasked with entertaining two Italian brothers, Lucas and Michele, so we went quad biking through the Sahara. And I quote, “not a holiday”! Michele ran the 100k the following day and came 19th, I like to think that his nerves were calmed by our Saharan excursion.

On October 3rd, we woke up at 4am to set up the race itself. We drove out to the desert and began stacking bottles and unfolding chairs until, a couple hours later, the first runners set off. At around 9am I went with Sarah Ben Hsouna, Amir’s social media consultant, and a couple reporters working for the German press. We followed a few runners from the comfort of our car and let the reporters take their photos. At each checkpoint along the course, a squadron of volunteers tirelessly stacked bottles, pitched tents and took down bib numbers. Eventually, we returned to the Ultra Mirage village and cheered for the returning runners – the winners of the 100k and 50k races were both Tunisians!

I’ve learned that Ultra Mirage is not only an extreme test of physical ability, but also of mental fortitude; each runner is alone with nothing but their thoughts, the landscape and the rhythm of their breathing. When I saw a young man cross the finish line and burst into tears, I could scarcely imagine the emotional odyssey he had just been through. I am reminded that happiness is not merely comfort, but comfort in the face of fear; the greatest reward is earned through sacrifice, and ultra-runners know this well. I, a non-runner, will take on the challenge next year and I encourage you to join me – it might just change your life.