The Dar was built around the 17th century, by the Aoun family, who lived in the same Dar for 300 years and were well known master artisan perfumers in the Medina. In 2006 the Dar was sold to the Ben Gacem family, which converted it into a 7room boutique hotel.

Dar Ben Gacem is located on ‘Rue du Pasha’, one of the most important alleys of the Medina of Tunis. The alley might have received its name from Dar Bacha, a building which has now been replaced by a secondary school. Dar Bacha was the seat of the Pasha, formerly the head of the county of Tunis, appointed by the Ottoman Sultan. During the early period of the Ottomans’ arrival in Tunis, from 1574 until the end of the 16th century, he held the highest political rank in the country 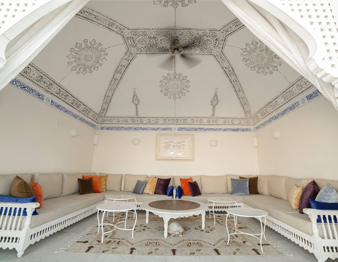 In the not so distant past, the sheikh of the tribe sits in a majlis to negotiate deals, reconciliations, meet guests and discuss socio-cultural matters. Today our roof-top majlis is a perfect casual meeting place, for brunch or after-work get-togethers. Contact us to share your needs and see how our Majlis use could be customized to your occasion 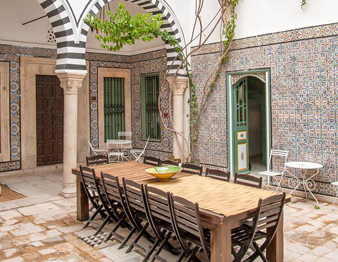 The most special moments are moments with family, and it gives us immense joy when guests want to plan their family reunions at our Dar. Contact us and share with us your special need/occasion and we could try our best to make each moment at our Dar memorable! 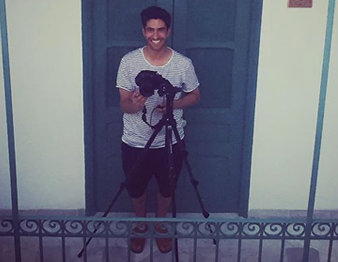 The cultural and artistic treasures of the medina are immense, and we love to support creative guests who could help uncover them through preservation activities, documentation, photography or share their know-how with Medina youth. We do not have regular calls for this activity, but we accept artists in residence depending on room availability and proposed projects feasibility and impact